Hex is a 15 year old criminal master mind and is the current leader of the HIVE West.

Hex's real name is unknown but her past life is known. She was 13 when it all started. A mad scientist took her and her sister (though she never knew Jinx was her sister until age 15 which was when she was stealing the lucky charm) and injected a formula that enchances the probability of bad luck. The formula worked! But the scientist wanted to use the two sisters as his pawns. When Hex found out about that, she told the other girl (Jinx) that they seriously need to get out of there and so they did. Both escaping at a different time period so they wouldn't get caught easily.

Like her sister, Hex tries to steal the lucky necklace, but fails and ends up in jail because of Kid Flash and Jinx. Brother Blood then found out that she was Jinx's sister and knew of her abilities. He paid all of her fines as took her out of jail. She then enrolled into the HIVE academy. Since then, Hex has been planning revenge on Kid Flash and Jinx.

Hex had dreamed about forming a gorup that was similair to the titans and that everything would be villai based. With the help of Brother Blood and some other infamous super villains who hated and despised the titans, they formed The HIVE.

She's very harsh when it comes to her teammates and the Titans. (and especially to Jinx + Kid Flash) But if you get to know her inside and out, you'll know she's like that because of Jinx.

Her appearance is some what like Jinx's but a bit different.

She has light blue hair instead of pink. Her irises are very light blue. She wears an earring cuff on her left ear. And her outfit is red, not purple.

"You gotta problem with that?"

"Buddy, I am this close to hexing you."

"you seriously think this stuff is in?" 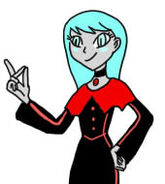 Hex about to jinx

Hex making a jinx circle to defend herself. 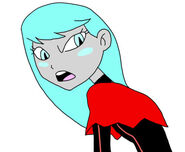 Well I don't need your help any way doofuses! I can make the HIVE team by myself!

You stupid titans always ruin everything.

Hex when she wasn't mutated. (She had one mutation she liked which was being albino) 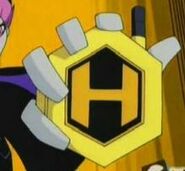 When you're given a HIVE communicator, TAKE IT! 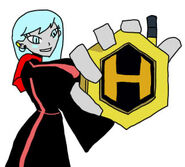 Welcome to the HIVE my friend!
Add a photo to this gallery
Retrieved from "https://ttff.fandom.com/wiki/Hex?oldid=27314"
Community content is available under CC-BY-SA unless otherwise noted.